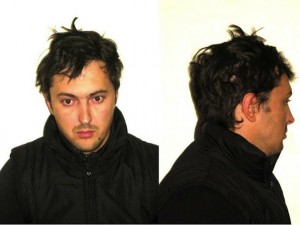 One man, using only a spoon, has escaped from one of Russia’s most infamous prisons.

Sky News reports that 33-year-old Oleg Topalov escaped from Matrosskaya Tishina, apparently by using a single spoon to dig a hole through his cell’s ceiling.

He is only the fourth person in 20 years to escape from the prison. Russian investigators have blamed Topalov’s escape on the prison staff, who they say engaged in a, “dishonest or careless attitude to their work that was made use of by the prisoner Topalov.”

Topalov, who was sentenced for double murder and arms trafficking, used the spoon to create a hole in the cell’s roof, opened a ventilation shaft and then climbed to the prison’s roof, finally escaping over the building’s perimeter fence.

“Because of the building being run-down, Topalov had no difficulty in widening the vent of the air-shaft, through which he got to the prison’s roof,” Russian Federal Penitentiary Service representative Kristina Belousova told RIA Novosti. “Using sheets tied one to another he managed to go down the wall, then jump over the fence and run away.”

One unnamed witness says Topalov didn’t use sheets, but rather acquired rope from the prison’s psychiatric ward.

Prison officials described Topalov as “mentally unstable and liable to escape,” and have offered a “large reward” for his capture.

Interestingly, under Russian law, Topalov only faces an additional four years of incarceration if he is captured.

Reports said Topalov shared a cell with around seven other prisoners, though it’s unclear what role, if any, they played in his daring escape.

Matrosskaya Tishina was first opened in 1946 and is considered one of Russia’s most secure prisons. Over the years, it has been home to high-profile Russian prisoners, including Mikhail Khodorkovsky and Sergey Magnitsky.

Inmates and their cells are checked each day for illegal objects. Because of this strict enforcement policy, investigators say Topalov could only have used a spoon to make his escape attempt.

Prison service spokesman Sergei Tsygankov said Topalov had been singled out as someone who was likely to make a prison escape attempt. And while Russian officially typically are reluctant to provide details surrounding inmates, they have released pictures of Topalov to the public as part of their attempts to apprehend the former organized crime member.

The prison’s last known escape occurred in 2005, when convicted hitman Aleksandr Solonik used mountain climbing equipment provided to him by a prison officer to escape. The pair rappelled over the prison’s walls using 20 feet of rope and have not been seen in public since.