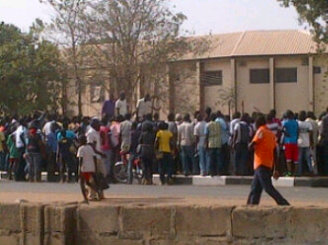 Hundreds of students, who sat for the Unified Tertiary Matriculation Examination on Monday in Kano staged a peaceful demonstration against  mass failure and withholding of their results.

The students stormed the premises of the Federal Radio Corporation of Nigeria  in Kano on motorcycles around noon and carried placards and green leaves to show their anger.

Spokesman for the candidates, Haruna Maidabam, described the withholding of their results as a deliberate attempt to deny them the opportunity to further their studies.

According to him, more than 10, 000 students who sat for the examination in Kano metropolis have yet to access their results.

Maidabam said when the results were released last week, they went to the zonal office of Joint Admissions and Matriculation Board in Kano (JAMB) to complain  but were directed to go and repeat the thumb printing for verification.

“There is no reason for any verification of thumb- print,” he said.

He called on the authorities concerned to do something urgently to address their predicament.

When contacted, the JAMB Zonal Coordinator, Hajiya Karimatu Abubakar, described the incident as unfortunate and attributed it to “some technical hitches”.

Abubakar said as soon as the hitches were rectified, the issue would be resolved. (NAN)