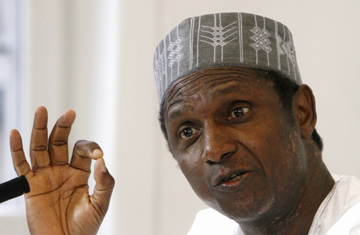 In commemoration of the third anniversary of the death of late President Yar’Adua, his successor,  President Goodluck Jonathan has urged Nigerians to emulate the commitment of the late president to the betterment of Nigeria.

This was made known, Sunday, in a statement signed by Special Adviser to the President on Media & Publicity, Reuben Abati.

“On this third anniversary of the passage of President Umaru Musa Yar’Adua, President Goodluck Jonathan remembers with an undiminished feeling of great personal loss, the fulfilling partnership he enjoyed with the late President at the helm of Nigeria’s ship of state.

As always, President Jonathan continues to honour the memory of the immensely humble, insightful, patriotic and dedicated servant leader who truly served his countrymen and women with all his strength and God-given abilities.

On this anniversary of the late President’s transition, President Jonathan urges Nigerians, especially public officials at all levels of government to rededicate themselves to emulating President Yar’Adua’s exemplary commitment to upholding due process, the rule of law and other globally-accepted principles of democracy and good governance.

President Jonathan joins late President Yar’Adua’s wife, children, relatives, the people of his home-state, Katsina as well as his friends and associates across the country in praying that the soul of the departed President continues to rest in perfect peace.”