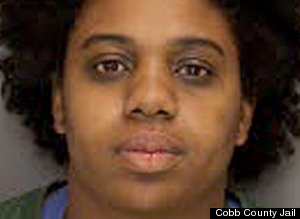 If you steal a book that famously commands you not to steal, does that drive home the point or negate it?

Fleming, 23, of Powder Springs, Ga., was arrested April 26, for allegedly stealing the good book from a Barnes & Noble in Cobb County, Ga.

She was charged with misdemeanor shoplifting, according to an arrest warrant obtained by the Atlanta Journal-Constitution.

Fleming was released on a $1,000 bond, MyFoxAtlanta.com reported.

However, she could have avoided the whole thing if she went to a church instead of a book store.

That’s because many churches and other groups offer Bibles for free, according to pastor Mark Scardino.

“We believe that God’s word should be given freely, and so if someone comes in to our campus and they don’t have God’s word, then we are very happy to give them a copy of God’s word,” Scardino said, according to The Global Dispatch.