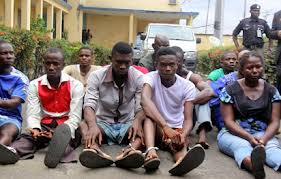 A Port Harcourt High Court on Thursday adjourned the case against 11 murder suspects for the killing of four University of Port Harcourt students in Aluu community to August 1.

The suspects are facing trial for their alleged involvement in the murder of the students in the community October 2012. Three of the suspects could not engage the services of lawyers and as a result the court could not take the pleas of the accused.

The judge, thereafter, referred the matter to Legal Aids Council to assign lawyers to defend the accused in their trial.

Rufus Godwin, the Rivers Solicitor–General, who led the prosecution team, said the application was premature as the pleas of the accused had yet to be taken. He argued that every step in crime prosecution counted, saying, applications could only be accepted after pleas had been taking. (NAN)