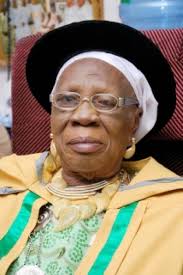 Governor Babatunde Fashola of Lagos State, his counterpart in Osun State, Rauf Aregbesola and Malam Nuhu Ribadu, ACN’s presidential candidate in 2011, have all mourned the demise of the President General of the Market Men and Women in Nigeria, Alhaja Abibat Mogaji.

They all described her death as a national loss.

In a condolence message signed by his Special Adviser on Media, Mr. Hakeem Bello, Governor Fashola said the mother of his predecessor in office and the National Leader of the Action Congress of Nigeria, Asiwaju Bola Tinubu throughout her life time was a forthright defender of the people and their right to economic empowerment.

He added that this trait had been imbibed by everyone, who has had the opportunity or privilege to fall within the ambit of her influence, stressing that this peculiar trait was evident in the personality of Tinubu.

Fashola described Abibat as a frontliner in the commercial development of Lagos State, particularly Lagos Island, which was formerly dominated by the Lebanese and Greek Merchants.

“She was one of the pioneer traders, who ventured into the capital intensive and risky business venture of importation of consumer goods, thereby breaking the monopoly previously enjoyed by the foreign traders and her business acumen attracted the attention of Multi-National Enterprises operating in Nigeria then, who had no option but to register her as a business partner and distributor of their consumer goods in Nigeria,” he said.

The governor described the late Iyaloja-General as a great matriarch, saying that Mogaji did not limit her business and social networking to the confines of Lagos State alone as she was always seeking for the welfare of market men and women as well as ways of opening up more business opportunities for them.

“This attribute of hers must have informed the unanimous decision of all commercial traders regardless of ethnic, religious or political persuasion to select her as the pioneer Iyaloja/President-General of Nigerian Market Men and Women. A position she has handled with utmost responsibility and diligence, he stated.

Governor Aregbesola in his message said Alhaja Abibatu Mogaji was a mother in a million.

In a statement issued and signed on behalf of Governor Aregbesola by the Director, Bureau of Communications and Strategy, Mr. Semiu Okanlawon, Aregbesola said the death of the Tinubu matriarch would leave a big vacuum both in politics and commercial sector of not only Lagos State but Nigeria at large.

“Mama Abibat Mogaji was a mother in a million. We commiserate with children, particularly Asiwaju Bola Ahmed Tinubu and others for the great loss.

“We commiserate the Oba of Lagos, HRH Rilwan Akiolu, the Mogaji Family, the people of Lagos, particularly Alhaji Femi Okunnu; the party (ACN); the government of Lagos, market men and women in Nigeria and Lagos in particular.

“We pray that God gives them the fortitude to bear the loss and we pray God grants her Aljana Firdaus,” Aregbesola said.

He also extended the condolence of the government and people of Osun to the immediate and extended families of Tinubu and other well-wishers.

Mallam Nuhu Ribadu said Abibat’s death was like drawing a curtain unto an era of “courageous women movement that characterised independence struggle and beyond, in Nigeria.”

A statement by Ribadu’s media aide, Abdulaziz Abdulaziz, last night in Abuja quoted the former EFCC boss as expressing sorrow and shock over the death of the renowned women leader who he described as “the last of exemplary amazons”.

According to him, the deceased’s doggedness, resilience and selfless community service were virtues that would remain indelible in the face of Nigeria’s history and non-state movements in black Africa in general.

Ribadu, who also hailed the entrepreneurship acumen of the deceased nonagenarian said the late Alhajat Mogaji was not only a successful businesswoman, as “she carried many budding entrepreneurs under her wings into building their own financial empires”.

Her death, he said, was not only a loss to her immediate family or the people of Lagos state. “Personally, I considered her as a mother-figure and source of inspiration who remained a devout Muslim and committed to improving lives of others up to the time she breathed her last. She was a true nationalist and a bridge builder. We will miss her a lot,” Ribadu said in the statement.

The ACN chieftain, who prayed for the repose of her soul, extended his “profound condolence to the immediate family, the government and people of Lagos state and Nigerian market women and the entire Nigerians.”

Abibat Mogaji who died Saturday evening at the ripe age of 96 will be buried Sunday, with prayers at the Lagos Central Mosque at 10 a.m.

The burial ceremony will hold at the Ikoyi Gardens and Vaults at 11 a.m and a reception thereafter at the Blue Roof, Lagos State Television in Alausa, Ikeja. [PM News]