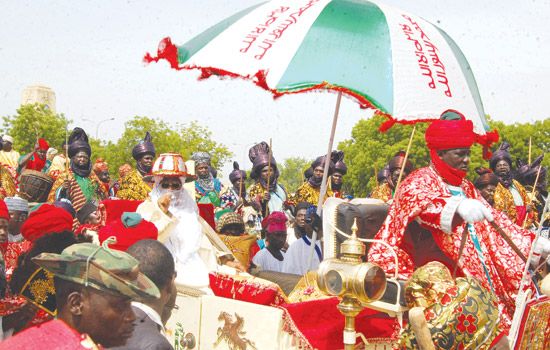 In the spirit of his golden jubilee anniversary on the throne, Emir of Kano Alhaji Ado Abdullahi Bayero yesterday said he holds no grudge against anyone just as he appealed to those he might have offended to forgive him as well.

Ado Bayero made this known Saturday in Kano at the grand Durbar to mark his 50th year as Emir of Kano.

The symbolic gesture might not be unconnected with the attempt on his life by suspected terrorists last January while he was returning from a religious function in the metropolis. The attack on his convoy left two royal guards dead while the Emir, with two of his sons reportedly sustained injuries and had to be flown to the UK aboard a Presidential Jet for treatment.

In his words: “Today marks a special day in my life, attaining unique 50 years on the throne. It’s indeed a day of great happiness for me. I want to use this unique opportunity to seek for forgiveness from all and sundry whom I may have offended directly or indirectly, as I have forgiven all those who may have offended me”.

The royal father also used the occasion to correct what he called the misrepresentation of his age in certain quarters. “Some people said I am 80 years of age; no, I am 83 years old. People should not reduce my age unnecessarily,” he told the mammoth crowd which gathered at the Kofar Kudu Ground of the Emir’s palace in Kano.

At yesterday’s event, the revered Emir in his special address to the people and dignitaries who gathered to share in his moment of joy, urged the people to be God-fearing and abide by religious injunctions in all their activities.

“Alhamdulillah, all praises are due to Allah for his mercy on us to witness these years. I received tremendous support from the people of the state and it’s wonderful and eventful for me”.

Bayero also enjoined the people to always guide their children to conduct themselves well and ensure they are enrolled in schools so as to be good people in the society who will be of service to the state and the nation.