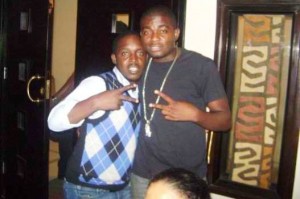 Singer and Producer Kelly Handsome has started his beef with rapper M.I all over again. Apparently, Kelly Handsome is pissed off because M.I is still performing his ‘Beef’ track in public shows.

Kelly Handsome feels insulted that a song aimed at him is been performed in public shows for the crowd to bump and grind to.

Read the tweets below: