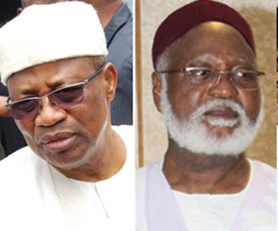 As Nigerians particularly in the south-west mark the 20th anniversary of the annulment of what the June 12 election, ex-militant, Mujaheed Dokubo-Asari has called for the immediate arrest of former Heads of State, retired Generals Muhammadu Buhari, Ibrahim Babangida and Abdusalami Abubaka.

Dokubo-Asari, who spoke in Warri, Delta State, on Wednesday, at a rally organized by members of the Niger Delta People Salvation Front (NDPSF), said the re-election bid of Dr Goodluck Jonathan in 2015 as president was non-negotiable.

The outspoken militant who was represented by his spokesman, Rex Anighoro, also demanded the immediate convocation of a Sovereign National Conference (SNC) to determine the continued existence and/or inexistence of the country.

The peaceful rally which began began at about 12.30 p.m from PTI Junction and terminated at Effurun Roundabout in Ovwie Local Government Area of the state, was held amid tight security provided by men of the Third Battalion, Nigerian Army, Effurun.

Anighoro, in his address, castigated the northern elites, past leaders of the nation, particularly those that masterminded the annulment and subsequent killing of Chief MKO Abiola, the acclaimed winner of the elections.

He also urged the Federal Government to strip Buhari, IBB and Abdusalami of the national honours bestowed on them.