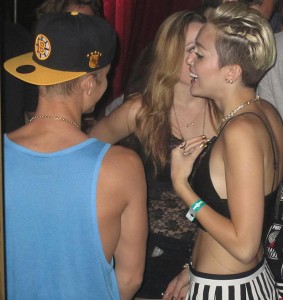 The pop stars – who have been friends since childhood – were reportedly spotted exiting Hollywood venue Beacher’s Madhouse in the small hours.

It’s claimed Justin spent just 10 minutes with Miley – who’s engaged to actor Liam Hemsworth – before heading off with her.

TMZ reports: “She hangs out there all the time. Justin rolls in to the club at 1.50 in the morning, goes straight for her table.

“They end up leaving together at 2am.

“Miley and Justin have a long history.”

Earlier in the day, Justin was seen driving away from her neighbourhood in his leopard-print car.

Singer/actress Miley was recently quizzed about her relationship with Justin, and vehemently denied they were anything more than friends.

Asked if she was having an affair with the pop idol on an LA radio show, she replied: “I’m engaged, I’m engaged. That’s impossible.”

However, her romance with Liam has fallen on rocky times of late.

Last month, a US magazine claimed the pair were living separately after Liam had told his fiancée they were finished for good.

Reports of turbulence between them first surfaced in February, when Miley was apparently jealous of her fiance’s close bond with actress January Jones.

More wobbles followed in April, with reports claiming they had postponed their June nuptials until later in the year.

Meanwhile, Justin is currently single after breaking up with Selena Gomez.

It’s said the Hollywood beauty has ruled out the chance of ever reuniting with her ex.

A source said: “Selena’s no angel herself, but Justin is certainly not the type of boy she needs.

“She’s finally taken some of their advice to heart and swears it’s finally over with him, for good.

“She doesn’t see herself getting back together with him and just needs to move on.”