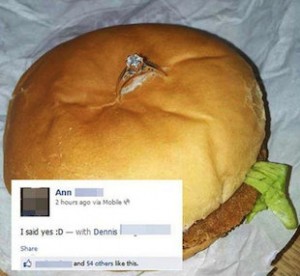 It must be true love: A man stuck an engagement ring into the bun of a chicken sandwich—and the woman accepted the proposal.

It almost makes the much-maligned wedding-anniversary bowling ball look like a touching gesture—yet Ann, the bride-to-be, didn’t seem to mind. In this photo of the sandwich and accompanying engagement ring posted to Facebook on Wednesday was the message, “I said yes :)”

(Ann’s last name, as well as that of her fiancé, Dennis, had been redacted from the page.)

As of press time, the picture had 54 “likes” from Ann’s Facebook friends—which leads us to believe there’s a touching backstory to the sandwich proposal. Still, you’d think if someone was going to put a wedding ring inside a chicken sandwich, they’d at least go for Chick-Fil-A.

What do you think—would you propose to someone using fast food as a prop? And would you accept a marriage proposal like this?