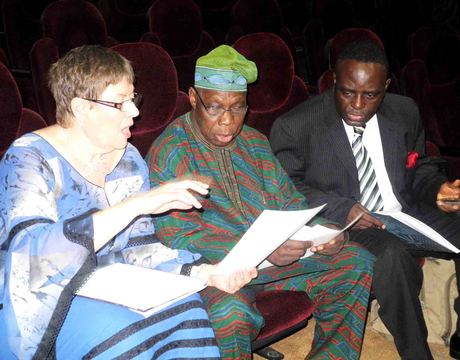 Former President Olusegun Obasanjo on Saturday in Abeokuta urged Nigerians and civil society groups to partner with the Federal Government to tackle flood in the country.

The former president said this at a one-day workshop on “Building a Coordinated Approach to Flood Disasters in Nigeria”.

The workshop was organised by the Centre for Human Security (CHS), an arm of Olusegun Obasanjo Presidential Library (OOPL).

“We are here to find a lasting solution to flood disasters in this country; I will not say that we are fools because already we are learning from our mistakes. The good thing about flood is that even though it’s a natural occurrence it is reasonably predictable and it’s seasonal and you also can predict places that may be affected.

“Normally, flood should not be a disaster; it is only when we are caught unawares that it becomes a disaster since it is seasonal and reasonably predictable.

“Why not therefore adequately prepare ourselves for it; I believe that the aspect of how to prepare for it is what brought us here,” Mr. Obasanjo said.

Mr. Obasanjo said that the Federal Government and United Nations agencies were working together on how to manage flood-related issues. He said the government should not be left alone to prevent and avoid floods.

“So, I believe strongly that all these groups and individuals as well as corporate organisations are also important in tackling flood disasters,” he said.

The Director of CHS, Professor Peter Okebukola, had said that the workshop was aimed at building more collaborative and proactive approaches for the upcoming flood season and beyond.

He said that a strategy document would be developed and distributed after the workshop.