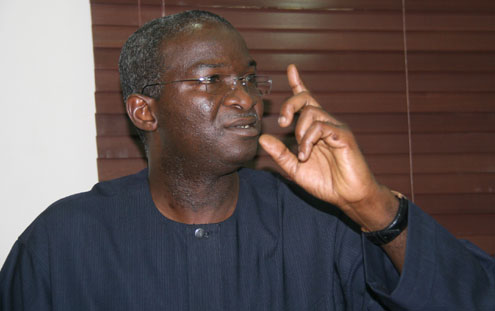 He also fingered the country’s law officers as the key promoters of the culture of impunity and cited the example of Ekiti State Governorship Election Petitions Tribunal, where he alleged that a lawyer filed an application to the Supreme Court even with the fore-knowledge that such cases end at the Court of Appeal.

Fashola, who stated this in a statement signed by his Special Adviser on Media, Mr. Hakeem Bello, noted that what happened after the NGF election, “sends a very dangerous message, a message of impunity. The message is that in the contest, if we do not win then we must not accept the result.”

The governor said: “With the development, can you now look at the Commissioner of Police in the face and say they have not done their work? But I will respond to the situation the only way I know which is the law court; because I cannot sit down and allow that kind of impunity to sustain.

“All of the things we thought could not happen in Nigeria have happened and they will continue to happen unless we put a stop to it. The level of impunity that I see in our country gives me cause for concern.

“I think, as professionals and as leaders of the Nigerian Bar Association (NBA), the time to start doing something was yesterday; because it will consume us if we do not return to the values upon which foundations of this country were laid, the values that demand that what is wrong is stated as wrong.

“If we do not put our feet down, it will be disastrous for our country. We can lead that change. We do not need a multitude to do so. We just need men and women who will not buckle under pressure; men who will not sell their soul for a mess of pottage. That’s all that it takes.”

He, therefore, urged the law officers “to stop accepting briefs that do not uphold the principles and values of integrity and transparency. We must find in us the capacity again to speak the truth to those in authority. We must find capacity also to say no when it is wrong.”

He said the impunity was sustained because those involved found willing hands among the ranks and file of law officers.

“It is a reflection of impunity because there must be a time when contests come to an end and people accept that it is finished. You can imagine what happens in a field of play when a referee says it is finished and one of the teams says ‘no we must continue because we have not yet scored so you cannot call it off,” he said.