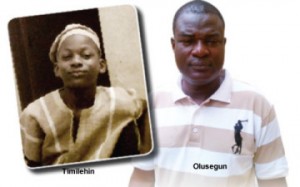 When on June 13, 2013, the Ebun family went to pick up their son, Jide, from the Murtala Mohammed International Airport, Lagos, everybody was happy because the 17-year-old boy had been in Canada where he was schooling and had not seen his family for two years.

The family comprising the father, Olusegun, the mother, Funke, the first son, Jide, the only daughter, Damilola, and the last child, nine-year-old Timilehin, were in a Sports Utility Vehicle, a Nissan Pathfinder, with registration number HD844EKY.

Timilehin sat in the centre of the back seat with his two siblings where he was playing a hand-held game.

The nine-year-old boy and his father were engaged in an argument as regards his future ambition. While the little boy said he wanted to be a footballer, his father advised him to go to the university to study medicine after which he could go ahead to become a footballer.

The reunion was however short-lived. On getting to Mile 12 end of Ikorodu Expressway, a police stray bullet pierced through the windscreen of the vehicle and killed Timilehin on the spot.

Our correspondent, who visited the family home of the deceased on Sunday, saw sympathisers coming in droves to condole with the family.

The deceased’s father told PUNCH Metro that the police had stolen their joy.

He said life would never be the same without the little boy who was full of life and was always making the house lively.

Narrating what transpired on the fateful day, he said, “Jide had been away for two years and my plan was to go and visit him in Toronto, Canada. However, he said he missed his siblings and wanted to come home to see them. So, we decided to let him come. On that day, we went to pick him up at the airport. We were on our way back home at Ikorodu.

“On getting to Kosofe Bus Stop at Mile 12, we saw policemen trying to extort money from a commercial bus driver who had climbed the culvert to drive back towards Ketu. There was an argument in the process and policemen started shooting.

“One of the bullets pierced through my windscreen and hit Timilehin in the eye. The broken glass also injured my wife and Jide. Immediately after the shooting, the policemen boarded their patrol vehicle and fled to their station. I carried my son to a nearby hospital where he was declared dead.”

Olusegun said touts were able to chase the policemen but in the ensuing pandemonium, his telephone and ATM cards were stolen.

He said on getting to the police station, he dropped the corpse of his son at the counter and all the policemen fled.

He said he remained at the station for two hours as the policemen refused to take his statement.

He said, “I got to the station with my son’s corpse and I created a scene as I told the policemen that they must kill me too. They all fled and when the Divisional Police Officer finally attended to me, the policemen were denying the allegations as they traded blame.

“After two hours at the station, I had to call a senior official of the Lagos State Government who then spoke with the DPO. My wife then wrote a statement.”

Olusegun described his son as an intelligent boy and a fan of Manchester United Football Club.

He said, “Timilehin was the only one that could operate our television very well even though he was just in primary three at Royal Scholars Montessori School. He loved watching Eurosports and cartoons and his best team was Manchester United. The police have stolen our joy.”

The Deputy Police Public Relations Officer, Damasus Ozoani, told PUNCH Metro that it was possible that Timilehin was killed by armed robbers as a robbery incident had occurred in the area that night.

He however said the team of policemen on duty had been arrested and transferred to X Squad, the police department in charge of handling crimes committed by policemen.

“About two hours later, a man came to the station with his dead son, saying policemen killed him. The team of policemen has been arrested along with the driver. However, we are not ruling out the possibility that the boy was killed by robbers because there was a robbery in the area that night.”

A police source identified some of the arrested policemen as Inspectors Olaleye Sunday, Sule Dauda and Sergeant Razaq Alowonle.

The deceased’s father, however, berated the police authorities for trying to exonerate their men.

“It was policemen that killed my son, not armed robbers because I saw a patrol vehicle; except robbers now use patrol vehicles. The police have stolen our joy and all we want is justice for the death of Timilehin,” he said