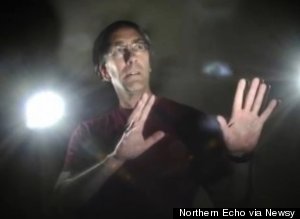 The 53-year-old politician, who represents Whitby, is raising eyebrows because of his belief that he fathered an extraterrestrial child – named Zarka – with an alien he calls the Cat Queen. His real mother, he says, is a 9-foot-tall green alien with eight fingers, according to the Northern Echo.

He revealed his other-worldly past in a new TV documentary, “Confessions Of An Alien Abductee,” and claims he’s been getting down and dirty with higher beings about four times a year.

“What will happen is that we will hold hands and I will say ‘I’m ready’ and then the technology I don’t understand will take us up to a craft orbiting the earth,” he told the site.

His wife isn’t happy about his intergalactic galavanting, but dealt with the news because “it is not a human level,” Metro reports.

When he’s not working on city council or as a driving instructor, Parkes is talking about Cat Queen and Zarka. He’s been talking about alien abduction for years (video below), describing his own trips to outer space in great detail.

He claims there are “plenty” of people who have had the same experience but won’t speak about it because they are “terrified it will destroy their careers.”