Brazil’s local media on Friday reported that the Confederations Cup could be abandoned because of the protests which have swept the country before and since the opening day of the tournament.

In a swift response, the Federation of International Football Association (FIFA) has strenuously denied the reports and the rest of the matches are expected to go on as scheduled amid protests that continues to gather momentum.

“Neither FIFA nor the local organising committee have ever discussed the possibility of cancelling the tournament,” a FIFA spokesman told BBC Sports. “There are currently no plans to discuss that.”

“These reports are pure speculation.”

At least 40 people were injured in Rio de Janeiro, where an estimated 300,000 swarmed into the seaside city’s central area, running clashes played out between riot police and clusters of mostly young men, their T-shirts wrapped around their faces.

In Salvador, where the match between Nigeria and Uruguay was played, police shot tear gas canisters and rubber bullets to disperse a small crowd of protesters trying to break through a police barrier blocking one of the city’s streets. One woman was injured in her foot.

Elsewhere in Salvador some 5,000 protesters gathered in Campo Grand Square. Italo Santos, a 25-year-old student said: “We pay a lot of money in taxes, for electricity, for services and we want to know where the money is,” as he walked toward the square.

By Thursday evening, the number of protesters had swelled to 1 million, according to local police estimates from cities across Brazil. With tens of thousands of foreign visitors in Brazil, the unrest has come at this critical time when the country of over 190 million-peoples hosts the Confederations Cup. 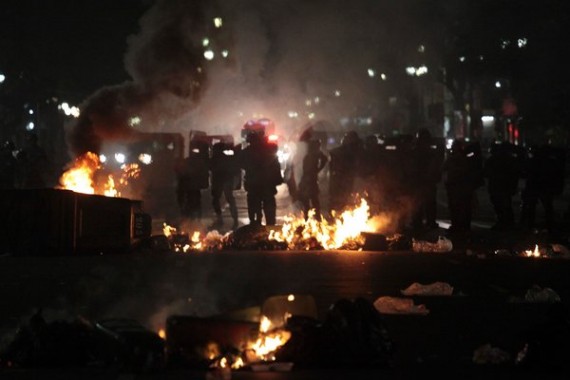 It also comes one month before Pope Francis is due to visit the South American nation and ahead of the 2014 World Cup and 2016 Olympics, raising concerns over security.

“By law if there is no guarantee of safety, it could force the tournament to be cancelled,” Estado de Sao Paulo newspaper said on Friday.

Another local newspaper, the Folha de Sao Paulo said FIFA and the participating teams were “terrified” by the situation, adding that: “The competition has become a nightmare for the organization.”

Many believe the protests are no longer just about bus fares and have become larger cries for systemic changes.

President Dilma Rousseff called an emergency meeting with top advisers on Friday morning. Rousseff has been largely absent since the demonstrations broke out, making one public statement but offering no speeches or grand gestures in an attempt to calm the situation.