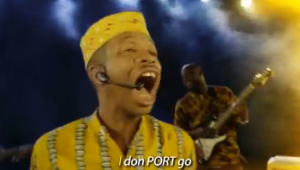 The Chief Executive Officer, Etisalat Nigeria, Mr.Steve Evans,  has described the celebrated porting of the comedian Hafiz Oyetoro popularly known as Saka as a mistake, noting that he will return back to the Etisalat fold after 90 days.

Speaking in Lagos yesterday at a media Roundtable on Mobile Number Portability (MNP), Evans noted that “We all make mistakes in life” and the decision by Saka to port from Etisalat to a rival network MTN Nigeria was one of such mistakes on the part of the comedian.

In what could be regarded as one of the official statement by any high ranking staff of Etisalat since Saka ported over a month ago,  Evans said he is hoping Saka would realise his mistakes and port back at the end of the 90 days grace period given by the Nigerian Communications Commission (NCC) for subscribers to port back to any other than his original network.

The CEO noted that Etisalat was well prepared for the MNP and has built and expanded its network to accommodate over 30 million subscribers which is double its present capacity.

He noted that his company has recorded very impressive results since the MNP kicked off on April22. Though he refused to provide the details but said he was satisfied with the report he was getting from his men on the field.

Furthermore,  Evans maintained that his company has improved tremendously in its Key Performance -indicator (KPI) ratings.