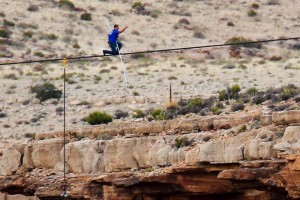 The Grand Canyon is 277 miles (446 km) long, up to 18 miles (29 km) wide and attains a depth of over a mile (6,000 feet or 1,800 metres). Nearly two billion years of the Earth’s geological history has been exposed as the Colorado River and its tributaries cut their channels through layer after layer of rock while the Colorado Plateau was uplifted.

Wallenda, who walked across Niagara Falls last year, was rigged up with multiple cameras and microphones broadcasting the death-defying feat live around the world.

Unlike the Niagara Falls walk, the 34-year-old wore no safety harness for the stunt, which took him 22 minutes and 54 seconds to cross the 426-metre wire in gusty conditions over the famous tourist attraction.

Wallenda – who first walked the wire aged 2 – stepped out onto a wire six times higher than the one he walked at Niagara with nothing but five centimetres of steel separating him from the rocky canyon bottom.

He began final training in Florida weeks ago, boosting stamina by walking repeatedly along a 300-metre long rope and using wind machines to simulate gusts of up to 80kph.

He had been planning the walk for about four years, homing in on a remote location at the eastern end of the mighty geological chasm, on land operated by the Navajo Nation Parks and Recreation.

Because of the risk involved, there was a 10-second delay on the live broadcast.

Wallenda, a seventh generation member of the Flying Wallendas circus family, said before the feat that he would be thinking of his great-grandfather Karl Wallenda, who died in 1978 after falling from a tightrope, as he stepped out.

The Florida-based adventurer repeatedly thanked Jesus during the walk, and says his Christian faith is important.

“What I get from my Christian faith is that I know where I’m going to go when I die. And that affects my business, because what I do is risky, and if I die, I have peace,” he said.