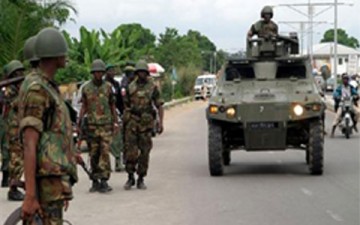 Eleven persons have been confirmed killed in separate attacks by men suspected to be members of the Boko Haram sect when they invaded the Government Secondary School and a military checkpoint in Damaturu, the state capital.

The Military Joint Task Force, JTF spokesman in the state, Lieutenant Eli Lazarus, in a statement on Monday, disclosed that two teachers, seven students and two of the gunmen were killed during the attacks.

According to the statement, three soldiers were critically injured in the gunfight which lasted for over five hours.

The army spokesmen said three of the suspected Boko Haram members were caught alive and in custody of the JTF.

A breakdown of the dead indicates those that lost their lives as seven students of the GSS Damaturu, two teachers of the school and two members of the suspected Boko Haram members.

Mohammed Ya’u (SS3 student) Abdulkadir Mohammed (SS2) and Goni Abubakar (SS1), who survived the attacks, said in Damaturu that the gunmen stormed their hostels shortly after 9pm on Sunday and started shooting sporadically as the panic-stricken students fled through the windows and doors of the hostel.

According to them, the gunmen, who they said were many, also forced some of the students to lead them to the teachers’ quarters, after which they were also killed.

Yobe is one of the states currently under state of emergency declared by President Goodluck Jonathan last month.