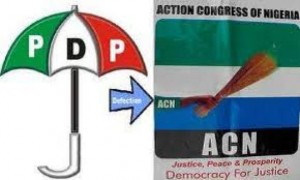 National leadership of the Peoples Democratic Party, PDP yesterday alleged that the Action Congress of Nigeria, ACN was supporting the activities of members of Boko Haram that have engaged in massive killing and wanton destruction of property in the country.

In a statement yesterday by PDP National Publicity Secretary, Chief Olisa Metuh, the party noted that for ACN to criticise the Federal government’s order to proscribe all terrorist groups in the country, the opposition party never liked the country.

According to PDP, the ACN was out to use the press as a subterfuge to hide its support for insurgents as well as whittle the current efforts by the Federal Government to end acts of terrorism in the country.

The PDP however reinstated its support for President Goodluck Jonathan for the move, adding that contrary to claims by the ACN, no part of the Presidential Order proscribing terrorists groups, directly or indirectly violated any provision of the constitution or impinged on the freedom of the press in the country.

Metuh who described the allegation by the ACN that the order was aimed at gagging the press as despicable and a clear indication of how far the opposition party can go to distort facts to support violence and cause disaffection among Nigerians, said, “Our attention has been drawn to a statement sponsored by opposition Action Congress of Nigeria (ACN) in which, in its usual homage to falsehood, deceit and distortion of facts, tried to suggest that the recent order by President Goodluck Jonathan proscribing groups engaged in acts of terrorism violates the constitution and aimed at stifling the press.

“This deliberate distortion of facts clearly betrays ACN’s support for such groups as well as the heinous attempt to whittle efforts by the Federal Government and well-meaning Nigerians to end insurgency in the country.

“Section 5 (1), of the order which the ACN is kicking against prescribes a term of imprisonment of not less than 20 years ”for any person who knowingly, in any manner, directly or indirectly, solicits or renders support for the commission of an act of terrorism or to a terrorist group”.

“By all indications, it is clear that neither this section nor any other section of the order for that matter, infringed on the rights of Nigerians and the freedom of the media as guaranteed by the constitution. Rather the section clearly seeks to stop incitements to commit a terrorist acts”.

“In trying to distort the facts, the ACN sought to weaken the fight against insurgency, but ended up betraying its support for acts of terrorism and Nigerians have taken note.’’

According to PDP, it was solidly behind President Goodluck Jonathan in what it termed, his untiring efforts to ensure an end to acts of terrorism in the country. It commended the President for the Order which it described as a welcome development adding that “those who have nothing to hide need not be afraid”.

The party therefore urged Nigerians to continue to go about their legitimate businesses as well as note the activities and interests of parties such as the ACN.