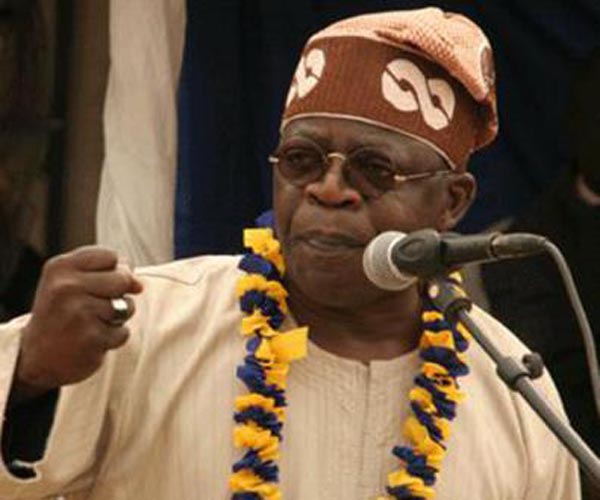 In a move that seeks to absolve him of any blame in the removal by Ekiti State caucus in the House of Representatives of Hon. Opeyemi Bamidele as its leader over his ambition to contest the 2014 governorship election in the state, the National Leader of Action Congress of Nigeria (ACN) Senator Bola Tinubu on Wednesday called for a reversal of the action saying the lawmaker has every right to present himself for election as governor.

The ACN national leader, who made his position known in a statement he personally issued within 24-hours of the removal of Hon. Bamidele by his Ekiti State colleagues in the House, averred that, “ I  have said before, any party member has a right to contest the governorship of Ekiti  or any other state. Any other person, including Opeyemi Bamidele, has the right to. This right is so fundamental to internal democracy that I do not believe he should be sanctioned at this point where all he has done is make unofficial statements about contesting. Our party cannot join the club of other parties that punish members for expressing interests in an office.”

The statement read in part: “It has been reported that members of the Ekiti State Caucus in the House of Representatives suspended Hon. Michael Opeyemi Bamidele, as their leader because of his alleged declaration to contest the governorship election next year.  I have not seen an official word through the party machinery about this action. However, I feel compelled to speak to dispel rumuor and false report from assuming the aspect of fact.

“The news of the purported removal of Opeyemi Bamidele came as a surprise. The decision of the members of the Ekiti House Caucus in this regard truncates ongoing efforts at reconciliation. Notwithstanding the fact that the party leadership is working hard to reconcile all sides, what took some members of the leadership of the party to Ekiti State recently was a continuation of the process of appeal and reconciliation. The objective here is to first understand and iron out the issues that have resorted in a gulf between Opeyemi Bamidele and Governor Kayode Fayemi on one hand and the party towards building a formidable political house in Ekiti.

“From my vantage point, I don’t believe the members of the Ekiti caucus could possibly take such a step for such a scant reason.  I trust their democratic pedigree to highly believe that they would not be used to take this false step which would violate established party rules, processes and traditions.

“For instance, decisions of this critical nature must be done with the consultation of the national leadership of the party.  From what I can gather, our National Chairman and the party’s leadership were never consulted or notified about the pendency of such a stark action.  For that reason alone, if such an action has been taken, those who did so should retrace their steps to avoid creating an unnecessary difficulty for themselves and the Ekiti chapter of the party.

“While Opeyemi Bamidele’s position may not be popular among his colleagues, he has the right to believe as he does. We must protect and smother unpopular and minority positions. If we don’t like it, we vote against it at the appropriate time, but we do not punish people simply for thinking differently, this is how we must grow our democracy.

“Thus, Opeyemi Bamidele was expressing his democratic rights. To unilaterally suspend him as leader of the House Caucus is a questionable one they should reconsider.  It would appear to contravene the letter and best spirit of party democracy. While we have no problem in him pursuing his democratic ambition without intimidation and persecution, we will continue our efforts at persuading him not to rock the boat and play into the hands of our opponent particularly the PDP shenanigans. Political conflict, challenges and resolutions are the hallmarks of political association and leadership; orderly means of all efforts at democratically resolving those conflicts are not endless in any way.

“Accordingly, I urge our five lawmakers; Robinson Ajiboye, Bamidele Faparusi, Bimbo Daramola, Dr. Ifeoluwa Arowosoge, and Oyetunde Ojo to  reverse themselves and embrace the process of amicable resolution already put in place by the party and that have been producing good fruit. To do otherwise is to give comfort to those who would seek to divide the Ekiti State chapter of the Action Congress of Nigeria. We appeal to those promoting these divisions to sheathe their swords in the interest of the party and its ardent followers. We cannot forget so soon the struggle and what it cost us to get to where we are today. We owe it to Ekiti people and all democrats in the country to sustain and protect this hard-won democracy. All true progressives must rise up in defence of individual freedom and promotion of democratic values,” the statement concluded.