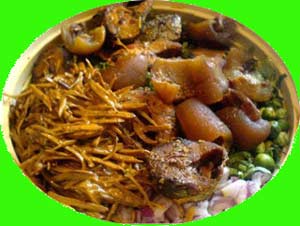 The joy of a family, residing in Graceland Housing Estate, Egbeada, Owerri, almost turned sour as no fewer than 30 of their guests ended up in hospital after eating a suspected poisoned Igbo delicacy, Ugba.

Vanguard gathered that the family (names withheld), invited their friends and relations to the Christening ceremony of their child and they all retired to their Graceland Estate residence after service.Ugba (Oil Bean Seed) is native to Eastern Nigeria, Ugba undergoes extensive fermentation before it is considered edible.A reliable source close to the family informed Vanguard that the delicacy was purchased from the Owerri main market.“The local delicacy was served to all the guests, numbering over 30. All of them enjoyed it but oblivious of the danger lurking around the corner,”

the man recounted.According to him, feelers started trickling in that some of their guests had ended up in several hospitals, including the Federal Medical Centre, Owerri.A man, whose wife consumed the delicacy and who preferred anonymity, said his wife started stooling and vomiting later that evening and was rushed to the Federal Medical Centre, Owerri.Continuing, the man said that he was shocked to find that another woman, who was equally a guest at the child dedication ceremony, was already admitted in the hospital, suffering from the same symptoms.

It was further gathered at the time of going to press that the medical doctors were still battling to save the lives of the new baby’s mother and her father in-law.Vanguard recalls that only recently, eight persons in Ngor Okpalaeke Local Council Area of Imo State, lost heir lives after consuming the same local delicacy.