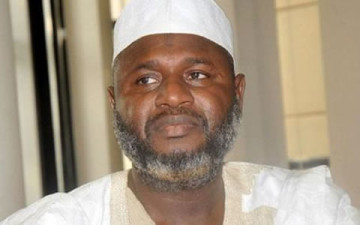 In this interview culled from PUNCH newspapers, first Executive Governor of Zamfara State and now representing Zamfara West Senatorial District in the Senate, Alhaji Ahmed Sani Yerima Bakura, speaks about the recent controversy surrounding the 1999 constitution review as well as his reply to allegations that he is an extremist, who uses religion to suit his purposes.

Explaining why he called for the vote on the deletion of Section 29 (4) (b) from the 1999 Constitution to be retaken after the Senate had gotten the required 2/3 majority to push for its removal, Senator Yerima says:

“People do not seem to understand the issues; most of the criticisms about my position are based on ignorance. The issue was not about marriage, it is about renunciation of one’s citizenship. If you read the section carefully, it says a woman who is married shall be deemed to be of full age. The preceding section described “full age” as meaning age of eighteen years and above. Now, removing this section, will infringe on Islamic law because Islam recognises a married woman as having attained full age.

“Item 61 of the Second Schedule, Part I in the Exclusive Legislative List of the Constitution says the Legislative Powers include: “The formation, annulment and dissolution of marriages other than marriages under Islamic law and customary law including matrimonial causes relating thereto.” To delete sub-section (4) (b) will amount to a breach of Item 61 as I mentioned earlier. Our people should understand the provisions of our constitution.

“Now to the other part of your question, when we voted on the item the first time, I said nothing and I left to go and pray. When I returned from prayers, I discovered that there were two items which had been voted on but were revisited. I then raised the issue and the President of the Senate, Senator David Mark, being a just leader, a leader who listens, said a vote had been taken and passed. But I insisted and he gave us the opportunity to revisit the issue in the interest of fairness, we took another vote and we won.

He also cleared the air on the controversy surrounding his marriage to a then 13-year old Egyptian girl saying it was another “misunderstanding” of actions he took in conformity with the tenets of Islam.

According to him, “When I married my Egyptian wife I followed laid down procedures for marriage in Islam. When I informed the Ulama that I wanted to get married as is required by Islam they said they had to witness it because this was required before they could issue a marriage certificate. They were there, it was not done in secret; they witnessed it and issued me a marriage certificate, I still have it. So when NAPTIP (National Agency for the Prohibition of Trafficking in Persons) wrote me a letter on the issue, in my reply, I attached a photocopy of the certificate. Those who have decided to oppose anything that Yarima says or does speak about these things ignorantly. There was nothing Islamically wrong with my marriage.”

Backing up his view-points with example from the Holy Quran, the controversial Senator states that, “The Holy Quran says any married woman is of full age. That is why the Holy Quran says any married woman who commits adultery should be stoned to death that is under Islamic law. It is not a matter of a woman who has reached the age of 18 years. Some Muslims are ignorant about their religion. As far as the Quran is concerned, any married woman is of full age. And the Prophet Mohammed (S.A.W) said, for you to be married, there are conditions you must have attained as a woman. One of it is menstruation. Once you start your menstruation, you are of full age, you can marry, that is the Quran and the Haddith (saying and actions of the Prophet) I refer them to.”

On the seeming selective application of the Sharia legal code as it regards the amputation in 2001 of the wrist of Bello Jangebe, who was accused of stealing a cow and public servants, who allegedly pilfer billions in state funds without recourse to the law, Senator Yerima explains:

“Sharia law defines every minute issue that affects human life from conception, even sex, even going to the toilet, how you enter the toilet: you enter beginning with the left leg, you come out with the right leg, sharia law defines everything that has to do with human life especially the life of a Muslim. It clearly defines theft, betrayal of trust, mischief, they are all defined and the various punishments are also defined. Under the Sharia law, if you are my security guard and you officially have access to my bedroom or even if you are my cleaner and I kept my money on the table and you take it, that is considered betrayal of trust not stealing. If you are appointed by government or you are an employee of government and you are entrusted with funds and you took part of it, that is also betrayal of trust, it does not mean that you will not be punished but you will not have your hand cut. The only way you can have your hand cut is take for example, my employee, you are my cleaner, you enter my room break open my safe and take money out of it, you have stolen and should have your hand cut. People should understand these things.”

The former governor, who is a masters degree holder in Economics and once worked with the Central Bank of Nigeria (CBN) before he joined politics explains that he is only observing the teachings and practice of his religion and is not an extremist in so doing.

“I am not an extremist, I don’t believe in extremism” he says in reaction to being tagged one.

“I believe Islam wants you to be a moderate Muslim but moderation does not mean abandoning the tenets and principles of your religion. If you have to abandon the basic principles of your religion to be moderate, that is not moderation. I am a moderate in the sense that one, I believe in peaceful co-existence between Christians and Muslims, two, I believe in the right of a Muslim and the right of a Christian to practise his religion without hindrance as provided for in our Constitution. I don’t believe in killing human beings without any just cause, I believe that the only way life can be taken is through the legal process. If you are taken to court for a crime that deserves the death sentence, you are tried, found guilty and sentenced to death, the government should kill you. Any other way is unacceptable that is what my religion says. I don’t believe that people should be forced to renounce their faith. I don’t believe that, because my faith teaches me that there is no compulsion in religion. These are the kind of things; I have to practise my belief, my faith, based on my understanding.”

When asked if he will contest the 2015 presidential elections, the one-time presidential hopeful was not forthcoming but hinted he might be interested so long as former Head of State, General Muhammadu Buhari (rtd) is not in the race.

In his words, “In 2007 I came out to contest for the ANPP ticket but I stepped down for General Muhammadu Buhari, not because of pressure from people but because I believed he was a better candidate than myself. If tomorrow he is interested, I will not be interested. The only way I will contest is if General Buhari says no, I am not running. If Buhari is running, I am his supporter, I will campaign for him, I will endorse him.”