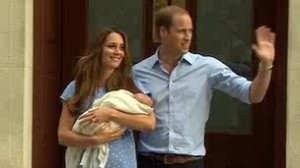 Britain’s royal baby may be born to rule as third in line to the throne, but Indian mystics have made the intriguing prediction the new prince will one day stand for elected office.

Taking his date, time and place of birth – 4:24pm in London on Monday – two stargazers in Mumbai have separately charted a much more politically active destiny than that of recent British monarchs, whose job is largely ceremonial.

“I’m seeing very strong changes in the monarchy,” he added.

The future king “may break some rules, he may be known for doing something not happening in the last 200 years”, he added.

Another mystic and holistic healer, Larra Shah, said the prince would run in an election for president or prime minister “and will probably win it”.

“Being a king or prince will not matter to him,” she said, explaining he would want to work for the good of the people.

“He will be very politically inclined,” she said.

The prince will also improve British relations with other countries, especially Arab ones, she predicted.

Both fortune tellers said the prince was born on a very lucky day – a full moon Indian festival known as Guru Purnima, when Hindus and Buddhists give thanks to their gurus and teachers in life.

Ms Shah said the royal, influenced by the planet Mars, would be extremely intelligent, a multi-tasker, romantic and flirtatious.

“Physically he could be a little big and maybe on the plumper side at some point,” she said.

“He will love food and luxuries, not to mention women.”

Mr Sharma predicted the as-yet-unnamed prince would live a long life and marry early – by the age of 26 – and have three children.

Vedic astrology holds huge sway in Hindu-majority India, with major decisions – from whom to wed to when to sign a key contract – determined by a close reading of the heavens and a person’s details of birth.

Many politicians also have personal astrologers and scrutinise their stars closely to determine auspicious days for both family and official functions or even results at the ballot box.

Another well-known Indian astrologer Bejan Daruwalla predicted the prince would be an “understanding” king.