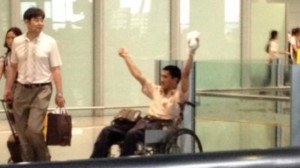 A man has been hurt after apparently detonating a homemade bomb in an arrivals hall at Beijing International Airport.

Pictures posted on the Chinese equivalent of Twitter, Weibo, show smoke in Terminal 3 after the blast at around 6.30pm local time.

Eyewitnesses have claimed that a man was sitting in a wheelchair in the arrivals hall, shouting and waving a small bag in the air before the explosion took place.

Photos taken in the minutes after the explosion showed a wheelchair lying on its side, medical workers attending to someone and people running through the terminal.

A man, who local media say is from Shandong Province and was born in 1979, was injured in the blast and has been taken to hospital.

No one else was hurt in the incident and airport operations are now back to normal.

Sky’s China Correspondent Mark Stone, at the airport, said the man may have travelled to the capital to petition for a particular social cause.

“This is looking like a tragic story really. There are a lot of people in China who call themselves ‘petitioners’.

“Every now and again they go a little bit further and it’s a very much more extreme form of petitioning and that I think, is what this appears to be.”

Stone said there is no suggestion it was a terrorist attack.