The Middle Belt Forum has told President Goodluck Jonathan that should he decide to contest the 2015 election, it will give him the necessary support to succeed. 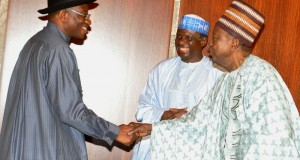 The Forum stated this Tuesday, after it held a meeting behind closed doors with Mr. Jonathan at the Presidential Villa, Abuja.

The meeting is coming on the heels of a similar one by a joint group of the Middle Belt/ South-South delegation which also met with the President behind closed doors.

Speaking with State House correspondents after the meeting with the President, the group led by former governor of Plateau State, Chief Solomon Lar, said it was disciplined and will not kick-start any 2015 campaign for Mr. Jonathan but would not hesitate to do so if the need arises.

Lar’s view was corroborated by a former Minister of Information and Secretary of the Forum, Professor Jerry Gana; and the Plateau State governor, Jonah Jang, who was on the delegation.

According to Governor Jang, “South South Forum is the zone of the President; so, if they have started making the noise, it is good because he is their President. Ours is to give support for the good of Nigeria. But you don’t start shouting before the man says this is where I am going. Supposing he says he doesn’t want to go? So, when he talks, if people are supporting, we shall come out to support him”.

Prof. Gana, while commenting on the issues discussed with the president, said the parley was designed for exchange of ideas.

“The interactive session pointed out a number of problems at stake, particularly the security challenges. So many people have lost their lives, property and suffered tremendously and we are expecting that the government, through the processes already in place, would ensure fair and just compensation where appropriate,” he said.