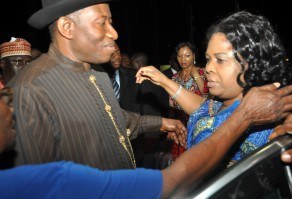 President Goodluck Jonathan has described his late mother-in-law as a woman with rare attributes, who was always willing to share whatever she had, no matter how little with everyone.

Mr. Jonathan said this in Abuja yesterday when members of the Federal Executive Council (FEC), led by Vice President Mohammed Namadi Sambo, paid him a condolence visit over the death of the First Lady’s foster mother, Mrs. Charity Iwari-Oba.

Expressing his appreciation to the delegation for the visit despite their busy schedules, the President disclosed that the First Family had been deeply pained since the news broke, adding that the deceased, who was Dame Patience Jonathan’s biological mother’s younger sister, was dear to them and was responsible for her upbringing.

“Our mother that died is quite dear to us, not just today that we are playing politics. The first lady stayed with her till she grew up. This lady never complained and even for me as an in-law, I was free with her, she shared with she had. She used her savings from trade to support us,” he said.

“It is very difficult to have somebody with such rare attributes. That is why when we heard about the death we were very pained. So that is the trauma we have been passing through and we thank you for coming to commiserate with us,” the President added.

Earlier, speaking on behalf of the delegation, Vice President Sambo said as part of the family (FEC), they were saddened by the passing away of Mrs. Iwari-Oba and shared in the President and his wife’s grief.

“It is sad for all of us because we are part of the family and we share in your grief. We pray God to give her peace in eternity” he said.

“We’ll continue to pray that God grant her eternal peace” Sambo added just as he prayed God to grant the President the fortitude to bear the loss.”

The chaplain of Aso Villa, Ven. Obioma Onwuzurumba, led the prayers for the repose of the deceased’s soul.