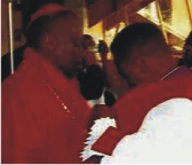 Chairman of All Bishops in Rivers State, Bishop Chibuike Nwabueze, who was arrested for allegedly ráping a 15-year old girl, was paraded by the state Police Command on Tuesday.

The Bishop confessed to the crime in the presence of journalists but claimed that:

He was hypnotised, adding that he was set up by the pastor of the church where the incident occurred as it seems some of those interested in his position don’t like him.TON gathered that Bishop Nwabueze claimed that it was not rapé but just séx that happened so fast. He claimed she removed her clothes after he finished praying for her in the office and before he could shout ‘the blood of Jesus,’ he was already on top of the girl, having séx with her.

The Bishop insisted that he was set up by his fellow Bishop, who are contesting for the post of Chairman of All Bishops in the state with him.

Nwabueze, who was paraded at the Rivers State Criminal Investigation department, SCID, Port Harcourt, said anybody could have fallen a victim of what happened to him.

He described as untrue, allegation that he made the girl abort a pregnancy from the incident. According to him, it was the girl’s father that did it but he took care of the bill.

He said: “We have different Colleges of Bishops. I am the Chairman of Communion of Bishops in Rivers State. Well, what actually happened was a set up. It was set-up by my enemies. The man who is in-charge of where I went to minister is my enemy. He is the person that set me up.

“To my greatest surprise, on the said day and after I had prayed for her, the girl started pulling off her clothes and before you knew it, I had carnal knowledge of her.”
LInked