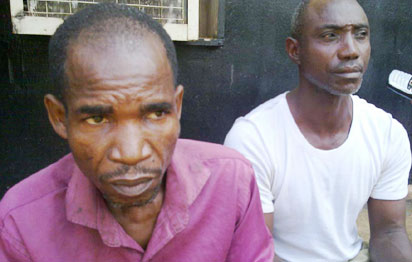 Benin-city, Edo — Child defilement is becoming a reason of concern in Benin-City, Edo State capital. It is even more worrisome that the heinous act is carried out by ‘men of God’. In the last few weeks, there were reports of no fewer than five children having been defiled in Benin-City.

The suspects include pastor Eze Fidelis of the Deeper Life Bible Church, Abudu, Edo State. The man is said to have had carnal knowledge of two girls: Joy, 9, and Anthonia,11.

There is also the case of one Grace, 12, who was sent on an errand by her mother to get her a rechargeable lantern from a hall within their compound. When the said girl failed to return after 30 minutes, the mother went in search of her, only to discover that one Segun Oteru, 42, was allegedly having carnal knowledge of her in the hall.

The woman raised the alarm which attracted members of the public while the suspect was arrested.

The incident happened on July 6. The following day, one Saturday Cole, 35, and a co-tenant of the complainant (names withheld), allegedly lured the complainant’s daughter, identified as Mariam, 11, into his room and had a carnal knowledge of her.

While the victim was coming out from the suspect’s room, her elder brother saw her and, on inquiry, discovered that the victim was not putting on her pants.

The victim narrated her ordeal in the hands of the suspect.

According to the victim, “Uncle has always bought me things but I didn’t know he wanted to have anything with me. He forced me and removed my dress, I was shouting but he closed my mouth and forced his penis inside me.”

On July 12, one Eugene Odozor, 46, allegedly took a 13-year-old girl, identified as Oluwabunmi, into his room and forced her to lie on his bed where she was said to have been defiled by the suspect.

Luck ran out on Eze, the suspect in the September 11, 2013 alleged rape, when Joseph observed that his daughter Joy, 9, was not walking properly. While suspecting that the daughter may have been defiled, he invited her inside the room and threatened to deal with her if she refused to say the truth. The little girl allegedly revealed that her pain started after she had sexual intercourse with the pastor. She further confessed that the pastor had intercourse with her friend, Anthonia, 11, too.

Joy revealed that the unwholesome practice had been going on for about a year.

Edo State Police Commissioner, Mr. Adebanjo, who expressed worry over what he described as the increasing number of underage sex in the state, said the action of the suspects was wicked and they will face the wrath of the law.

Pastor Eze confessed that he defiled both girls, Joy and Anthonia, saying he was possessed by evil spirit to commit the act.

“I am really ashamed of myself particularly as a pastor. I have been a pastor at Deeper Life for over six years but I was tempted to defile the girls. They were always visiting me; so, on this particularly day, I defiled both of them. It was temptation. I have a child. Joy brought Anthonia to my house. They were my church members. Their parents have left my church but we still leave close. I know their parents very well. They come to collect wheel barrow from us. Sometimes Joy will ask me for money to go to school.

“That particular day, I did not have money to give to her, so I asked her to go to school and come during break. It was during the break that she came in company of the other girl. I was tempted to defile both of them. They undressed and we all went to bed.”

Oteru, the 42-year-old who had sex with girl, 12, also narrated his story: “It happened that the woman employed me as her security guard. So there was this little girl working with the madam, but, whenever madam was not around, she would come to play with me. The girl is about 12 years old. I was tempted to have sex with her on several occasions. I have a wife but I don’t have girlfriend.

“The day we had sex, she told her madam that she wanted to go to the toilet, but she had informed me that she would come and use my phone because she was always playing games with my phone. I always assisted her in operating my handset. Each time she came, she would sit on my lap. That particular day, I was tempted to defile her. Unfortunately, the madam started looking for her and she entered my room and caught both of us making love.”