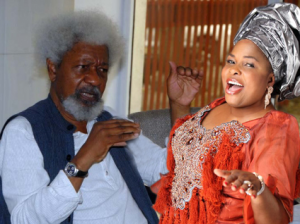 Despite his seeming old age at 79, Africa’s first Nobel Laureate in Literature, Prof. Wole Soyinka, still believes he has the strength to stand up to those he perceives to use their public office to oppress others in Nigeria.

He was speaking on the backdrop of his recent public spat with President Goodluck Jonathan’s wife, Dame Patience Jonathan.

And though the afternoon open-door lecture series tagged “WS79 – Memoirs of Our Future: An Audience with Prof. Wole Soyinka,” was supposed to be a commemoration of his birthday, the renowned thespian quickly delved into familiar terrain as he touched on the subject of the First Lady, her alleged interference in the affairs of Rivers State and abuse of power.

While fielding questions from a member of the audience at the event which held at the African Centre in Covent Garden, London on Saturday, Prof. Soyinka said he was not afraid to call the First Lady to order and also enlighten her if she cannot take a cue from how first ladies in other climes behave.

Shedding more light on the lingering political crisis in Rivers State, Soyinka revealed: “What happened in Rivers began long ago, before five decided that five was greater than 27. If we don’t move in support of the truth at certain mathematics, we shouldn’t be surprised if the next mathematics anomaly takes place at our doorstep.”

He added: “We move when there’s interference, when all roads are closed – for hours – because she’s going to her hairdresser.”

He warned that if members of the civil society remain indifferent to the abuse of office perpetrated by the president’s wife in states where she has visited, then Nigerians should not be surprised when a curfew is imposed the next time she is visiting their state.

The Nobel Laureate called on Mrs. Jonathan to borrow a leaf from Michelle, President Barack Obama’s wife, stating: “We ask unelected people to look around and see how the Mrs. Michelle Obamas of the world are conducting themselves,” adding, however, that if the Dames of this world do not learn, “we must educate them.”

Responding to a question if he was a friend of the embattled governor of Rivers State, Mr. Rotimi Amaechi, Soyinka replied: “That Amaechi is my friend is not an allegation,” because he would be friends with anyone who has been given the mandate of the people through the electoral process.

He stressed that he would not shy away from identifying with public office holders if they are fulfilling their obligations and responsibilities of governance.

“To say the Governor of Rivers is my close friend is like saying Kayode Fayemi or Dr. Babangida Aliyu or Governor Ibikunle Amosun or even the Second Republic Governor, Mohammed Shugaba, in Shagari’s administration, is my friend”, he stated.

However, Prof. Soyinka made it clear that “it’s not a matter of friendship,” but defence of democracy and truth, noting that he would not be afraid to switch loyalty if the people he once praised change their ways and start oppressing the same people who elected them.