Woman, 43, went to the Water Park with her niece and nephew, when two teenage employees approached her and told her to put on shorts because her bottoms were too small. 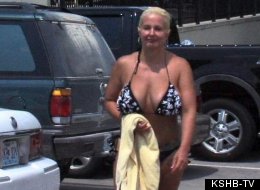 A supervisor of the Adventure Oasis Water Park ordered Madelyn Sheaffer to cover up or leave the park.

“I just felt like I was singled out,” Sheaffer told KSHB-TV. “I felt like it was both age and body discrimination and I felt like I could look around me and I could see a handful of other girls half my age, wearing the same size swimming suit and not being singled out and told to put on clothes or leave.”

Sheaffer then asked that the water park officials call the police to have her removed so that she could file a complaint against the park. On her Facebook page, she wrote that the officers who showed up sympathized with her plight:

“We can’t actually say anything,” they said as we walked outside, (as it is a city owned park), ..but I hope from the expressions on our face you can tell how we feel,” They were compassionate. They too, thought it was ridiculous.

Officials at the Adventure Oasis Water Park had no comment about the incident preferring to have the Independence, Mo., City Manager handle press inquiries since the park is on city land.

The City Manager was unavailable, but an assistant said that “the facility made the call and we rely on their judgment.”