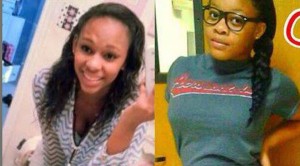 Two Cypress families were frantically searching from Houston to San Antonio for their missing teen daughters.

Liana Andrews, 16, and Kacie Watson, 14, are church friends and vanished on Friday night. Liana’s grandmother was watching the pair and went to bed.

“Liana and Kacie were both in Liana’s bedroom on the phone giggling,’ said Lana Turner, Liana’s mother. “That’s the last time anyone saw them.”

Liana sent a message to her grandmother that said they would be back home on Saturday around 1:30 p.m. The pair never showed up.

Andrews only has a learner’s permit, but when she and her 14-year old friend vanished, so did her mother’s car, a 2001 Gold Chrysler Sebring.

It was found days later abandoned in Downtown San Antonio near the courthouse with some of their personal belongings still in it.

The families believed the girls went to see a man they met online so police consider them runaways. The families want it reclassified as a missing persons case.

“This is not a runaway case,’ Turner said. “My daughter and her friend are in danger. I know that and I want them found.”