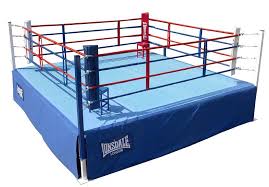 The iconic 5th Street Gym in Miami Beach, Florida was hit by burglars who emptied the historic gym of most of its contents, including the entire boxing ring. The 5th St. Gym is a landmark in the city, where numerous boxing legends including Muhammad Ali, George Foreman and Sugar Ray Leonard trained. Nina Spencer, mother of the gym’s owner, told WSVN 7 News, “Well, we were vandalized, as you can see, and the ring was stolen, and a lot of equipment and personal information.” Those at the gym are understandably devastated.

The 5th St. Gym opened in the 1950s and Angelo Dundee, famed boxing trainer to Muhammad Ali and others, was part owner. The gym closed for a while in the 1990’s then reopened in 2010. They are scheduled to move to a new location within Miami Beach next week. Police are searching for the criminals responsible for the huge job and gym personnel have suspicions about the perpetrators. Ms. Spencer said, “We think it’s an inside job because nothing was broken into, so we assume it’s an inside job.”

If you have any information on the crime, please call Miami-Dade Crime Stoppers at 305-471-TIPS where you can remain anonymous and may be eligible for a reward.