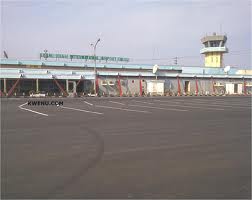 The first international flight from Akanu Ibiam Airport, Enugu took off to Addis Ababa at 2.20 p.m, Saturday, with 153 passengers on board.

The flight was operated by Ethiopian Airline with a Boeing 737-800.

Others who witnessed the event were the ministers of Aviation (Stella Oduah), Finance (Ngozi Okonjo-Iweala), Health (Onyebuchi Chukwu) and Power (Chinedu Nebo) as well as the Secretary to the Government of the Federation, Chief Anyim Pius Anyim.

Members of the National Assembly, led by the Deputy Senate President, Chief Ike Ekweremadu, state executive members and legislators, traditional rulers and captains of industry were also present at the brief ceremony.

Anyim described it as a dream come true for the people of the South-East, while Ekweremadu said that the introduction of international flights in the airport would make it easy for the people to travel to any part of the world.

Ekweremadu said the National Assembly would ensure adequate budgetary provision was made to complete the new terminal building.

The Chairman of the South-East Governors’ Forum, Obi, commended the president for fulfilling his promise to Ndigbo.

The host governor, Chime, said the flight was part of a grand plan to change the economy of the South-East zone positively.

Hailu said the Igbo were very enterprising and needed an outlet right from their doorstep.

He said that very soon the flight would go daily.

Aviation Minister, Stella Oduah said that more airlines would soon commence operation at the airport and announced that the Nigerian national carrier would start operation before the end of the year.