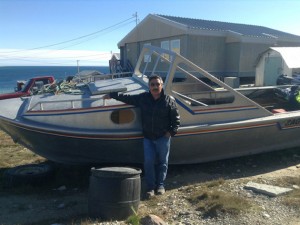 Elijah Evaluarjuk and his family lost their prized boat when it was swept away in a tumultuous summer storm. But nearly 13 years later, they have the boat back at home , after it was discovered resting on a remote island in nearly perfect condition.

“It was a really big deal,” Evaluarjuk told the National Post. “The boat was quite expensive for us. We had a canoe before that, with a motor on it. I had been going walrus and caribou hunting with my Dad for as long as I could remember.”

The family was away on a weekend hunting trip when a storm unmoored the boat. When they returned home, the boat had vanished from sight. Eventually, the Evaluarjuk moved on. They even got a new boat, though a more modest version than the 24-foot aluminum vessel.

“We thought that that was the end of our boat,” Evaluarjuk said. “We thought it must be at the bottom of the ocean.”

Even with modern technology, a number of ships sink or otherwise go missing each year. In 2012 alone, 67 vessels were reported to have sunk, grounded or gone missing. In April 2012, the U.S. Coast Guard sank a Japanese “ghost ship” that was spotted floating aimlessly, presumably swept away in the wake of the tsunami that hit Japan.

But as it turns out, while the Evaluajruk’s boat was still missing, it was far from lost. In the summer of 2012, a team of polar bear researchers showed up at the family’s hotel, located on a small island near Canada’s Bafffin Island.

While on an expedition, the polar bear researchers spotted a large, shiny object beached on a tiny nearby island. They landed to investigate and discovered the object was actually the long missing vessel.

“They spotted a light, so they turned around,” Evaluarjuk told the CBC. “They took pictures of it and sure enough it was our boat.”

And it was still in workable condition, albeit a little worse for wear.

“Polar bears had broken the windows, but otherwise it was as good as new. So we shined it up and towed it home,” Evaluarjuk said.

It was also an emotional moment for Evaluarjuk’s family, whose parents had since passed away between the time the boat was lost and its rediscovery. The returned boat was even a big deal for their tightly knit community, many of whom showed up to welcome the vessel back home.

“We brought it in at 11 p.m. It was still light. A lot of people came down to the beach to meet us. It was the talk of the community,” Evaluarjuk said.