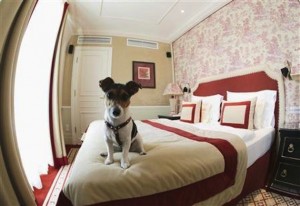 If you’re a single man, you may go to bed with a clear conscience but you rarely sleep on clean sheets. At least, that’s according to a new study, which found that single men on average only clean their bed sheets four times a year.

And while cleanliness numbers surge for married couples, it appears the credit for the median boost for guys primarily belongs to women. In fact, it may be the men who are dragging the women down, as the average washing frequency amongst couples is once every 2.3 weeks, with women doing 81 percent of the washing.

And as “How Stuff Works” points out, the average person spends about a third of their entire life in bed. In other words, the old saying, “ As you make your bed, so you must lie on it,” may have more meaning than originally intended.

But are these single men literally sleeping in beds of filth? Or, are the women perhaps overdoing it a bit? Turns out, it mostly depends on your own standards of cleanliness.

For example, Martha Stewart recommends washing the sheets weekly, but notes that itultimately is an issue of personal preference. The Wall Street Journal also says that weekly washes are the norm but that many other go several weeks between cleanings.

For people with asthma or other allergies, clean bed sheets are more of a priority. That’s because sheets, and mattresses and pillowcases in particular, are excellent at accumulating dust and microorganisms that can disrupt otherwise healthy breathing patterns.

In that case, many experts recommend laying plastic covers on top of mattresses and even pillows in order to keep those microorganisms from making a home inside the mattress or pillow padding.

“The conventional idea is that you might exacerbate eczema, hayfever or asthma at night, but all of these ideas are more based on conventional wisdom, not necessarily founded in experience,” Euan Tovey, head of the Allergen Research Group at the Woolcock Institute of Medical Research told MSN.

“We’ve done research that showed that you don’t get as much exposure to dust mites in bed as we once thought. Anywhere where there is dust and movement you are going to get exposure –– it’s not confined to bed,” he added.

According to the survey, people between the ages of 35 and 50 are the most likely to wash their bed sheets each week.

So, as Tovey said, health concerns might not be a major issues for younger sleepers. But it certainly could be an aesthetic one for younger men hoping to forge meaningful romantic relationships.

“Would you want to be invited into a bed of somebody who hadn’t washed it for months?” Tovey said.