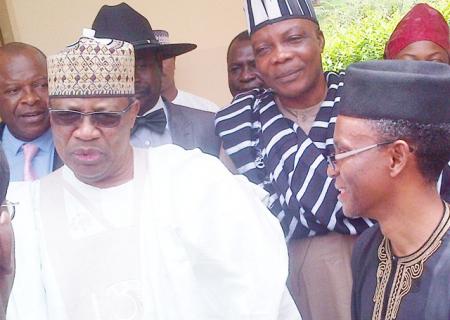 Former Military President, General Ibrahim Babangida, has hailed the registration of All Progressives Congress (APC) as a welcome development saying it would add vibrancy to the political space in the country.

This is just as he received a high-powered delegation of the newly registered party in his Minna Hilltop residence, Niger State.

Babangida, who spoke during his investiture as a Fellow of the International Institute for Leadership and Governance by chairman of the National Examinations Council (NECO) board Dr. Paddy K. Njoku, recalled that in the past, he supported the emergence of a strong opposition in a two-party system.

“I have always been and I will continue to be a strong believer of two-party system in the country,” Babangida said.

“I have said it severally; just like the People’s Democratic Party itself, that the coming on board of APC is a welcome development and with the registration of the party, we will now have vibrant political associations in the polity and as citizens you would have the choice to join any political party of your choice.

“The parties should try to talk to us the ordinary people and tell us what they intend to do for us, for the country and the rest of them. There are still more parties in the country like the SDP for example, there is also the Labour party, All Progressives Grand Alliance among other issues.

“But left to people like us whom God has not given the ability to predict correctly about the future, I think it is a good development,” he added.

Meanwhile, the APC delegation that visited the former president was led by the party’s deputy national chairman and former Speaker of the House of Representatives, Alhaji Aminu Bello Masari. Others are former FCT Minister and deputy national secretary of APC, Nasir El-Rufa’i; SenatorNazif Ibrahim and the national woman leader, Mrs. Sharon Chiazor.

Efforts by newsmen to wait behind and get details of the meeting was thwarted by security operatives who politely asked journalists to go away as the parley was a private one.