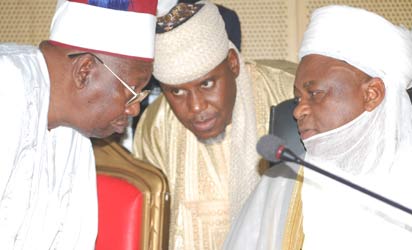 The Jama’atu Nasir Islam (JNI), yesterday alleged that there was a grand plot by some unnamed persons to plunge northern Nigeria – and by extension Nigeria – into a deeper crisis and called for fervent prayers from Muslims.

The Sultan of Sokoto, Alhaji Muhammadu Sa’ad Abubakar III, who is the supreme leader of Nigerian Muslims, was reacting to Monday’s bombings in the Sabon Gari area of Kano State and Saturday’s violent attacks in Borno State.

The Sultan’s reaction was contained in a statement issued in Kaduna.

It stated: “JNI once again under the leadership of His Eminence, Alhaji Muhammad Sa’ad Abubakar, CFR, mni, the Sultan of Sokoto and the President-General, received with bewilderment the news of the orchestrated multiple bomb blasts which were reported to have occurred yesterday night, at Sabon Gari, Kano, Kano State resulting in collateral damages and many lives lost. We strongly condemn the inhuman and ungodly act in its totality as it is reprehensible, and we equally call for calm and restraint. As it has always been our prayers, whatsoever is the intent/motive of the perpetrators of these contemptible acts, they will never succeed insha’Allah.

“JNI is perplexed that this act of unleashing terror on human lives continues unabated, despite visible number of uncountable security check-points mounted all through Northern Nigeria. More worrisome is the fact that this beastly act of terror comes just 24 hours after unleashing same on fishermen and traders in Kaka and Kukawa Local Government Areas of Borno State, which also claimed many innocent lives and [the loss] of many properties worth millions of naira.”

The JNI further stated: “These repeated acts call for concerted introspection, as they again point to the fact that there is the urgent need for proactive and effective ways of addressing these precarious security upheavals presently being witnessed in the country. JNI is also worried and cannot understand what is really happening. The perpetrators should be fished out and punished in accordance with the laws of the land.”

While commiserating with families of the bereaved, the Government of Borno and Kano States, their Royal Highnesses, Shehu of Borno and the Emir of Kano, JNI reiterated its call on the authorities concerned to as a matter of urgency, forestall future re-occurrences, which it does not pray for.

JNI alleged that “It is becoming more and more glaring to the right thinking person; there is a grand design to push the entire North into deeper crises and by extension the Nigerian federation” and therefore enjoined “all Muslims to fervently engage in Du’a (prayer) that will bring an end to these nagging nightmares of insecurity in our great country and may Allah, the Most High, save us from the enemies of peace and development, whosesoever they may be, especially that we are in the most sacred days of Ramadan.”

The statement concluded by calling on all Imams to include this in their respective Al-Qunut (special prayers).