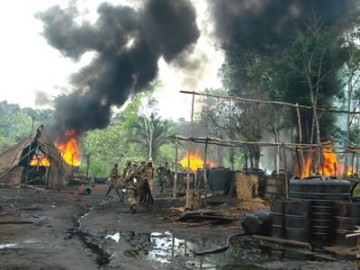 The Joint Task Force (JTF) in the Niger Delta on Friday said it had foiled attempts to reassemble illegal refineries in Samkiri, Bonny Local Government Area in Rivers.

This is contained in a statement signed by Lt.-Col. Onyema Nwachukwu, the JTF spokesman, in Yenagoa.

The statement said the failed attempt was based on a tip-off which led to the recovery of stolen crude in a plastic tank and implements used for local refining of crude.

It said the JTF also destroyed 48 local refineries in Rivers, Bayelsa and Delta, in multiple raids it conducted in the fight against oil theft.

The raids conducted from August 10 to August 23 led to the arrest of five suspected oil thieves.

It said the JTF had enlisted the support of community leaders in the areas where the illicit act was prevalent to discourage the youth from oil theft.

It said the operation also discovered an oil spill site caused by corrosion on a pipeline within Shell Petroleum Development Company’s (SPDC) oil field in Bonny Area of Rivers.

“The patrol team also reported a leakage close to a signpost marker KP-67 located around Pulokiri/Money Ground (between Adamakiri and Creek 6) general area.

“An assessment of the spot revealed that a brownish liquid substance was observed jetting out from an opening on the pipeline.

“The Commanding Officer, 146 Battalion Lt.-Col. Lander Saraso, attributed the leakage to corrosion on the pipeline,’’ the statement said.

It said SPDC authorities in charge of the Cawthorne Channel 2 should carry out a timely evaluation of the leaking point and effect immediate repairs on the line to prevent further spill.