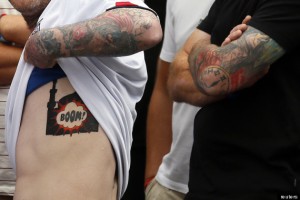 A man pictured flaunting a tattoo of a mosque being blown up at an EDL rally has been arrested on suspicion of inciting racial hatred.

Shaun Reah, 39, from South Shields, South Tyneside, was held after the provocative image began circulating on social networking websites, following the event in Birmingham on 20 July.

It shows a man lifting his shirt to show the inking of the Muslim place of worship emblazoned with the word ‘BOOM’.

He said: “Mr Reah is happy to fully cooperate with police in what is a case which has clearly triggered a great deal of emotion and debate.”

In recorded footage Reah told the channel he had had the tattoo removed because “it upset everyone”, and when asked why he had had it done in the first place, said “it was just a daft thing to do