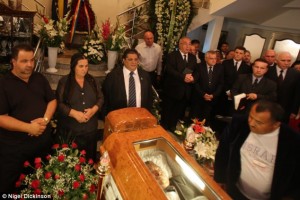 King Florin Cioaba died of a heart attack while on holiday in Turkey last week, and received the sendoff worthy of a royal.

His body was carried in an air-conditioned glass covered coffin down a four mile route in Sibiu, Transylvania.
A banner emblazoned with his crowned visage was draped across an apartment building in his hometown. Stonemasons have been carving his tomb in black marble for the last week.

‘He cared very much about his Roma community and he helped it a lot. He integrated it into Romanian society, he sent the members of the community to school,’ his relative Ion Rudaru said.

Thousands of Roma turned out for the funeral of their self-styled King as he was laid to rest in his hometown in Transylvania today.

Florin Cioaba, 58, who had taken to wearing a king’s crown as the leader of the minority community, became famous around the globe for arranging a marriage for his 12-year-old daughter.

After watching her storm out of the church to avoid becoming a child bride, ‘King’ Cioaba became an advocate for education for Roma girls and began preaching that girls should not marry before the age of 16. 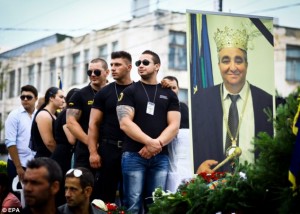 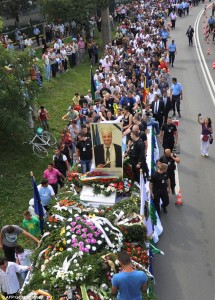