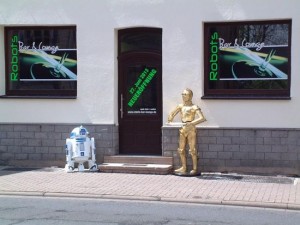 Some bars use intriguing names just to attract clients, but the Robots Bar & Lounge in Ilmenau, Germany really lives up to its name. This unique venue not only has a technology-inspired decor, but also a humanoid robot bartender that mixes drinks and makes small talk with patrons.

The Robots Bar & Lounge just opened late last month, but it’s already hugely popular in the town of Ilmenau thanks to Carl, an unusual bartender who fits right in the techie atmosphere of the place. Carl is a humanoid robot built by mechatronics engineer Ben Schaefer out of parts from disused industrial robots.

Schaefer says that although progress has been made in the field of robotics artificial intelligence is still in its infancy, but by placing a robot in an environment where it can observe and interact with real humans it’s much easier to test the programming and make necessary improvements than it would be in a closed laboratory. Apart from evolution, Carl’s secondary goal is to bring humans and robots closer together, and prove that “scenes from science-fiction movies are quite possible”. So far, the likable bartender is doing a great job, entertaining clients with his drink-mixing skills and the occasional small-talk.

Unfortunately, his speech recognition skills and ability to interact are very limited at the moment, but like all bartenders he is a very good listener. To make sure he doesn’t bump into things and spill the drinks on his clients, Scahefer equipped Carl with a belt of sensors. 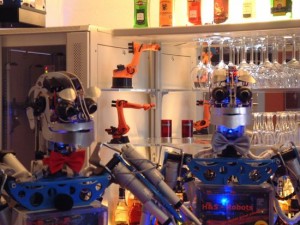