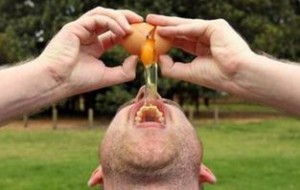 A man died after downing many eggs because his friends challenged him to do it, according to press reports.

It is being called death by the egg. The young Tunisian man has died after winning a bet to eat 28 raw eggs at once.

Dhaou Fatnassi, 20, of the city of Kairouan, ingested the eggs after his friends challenged him to do it for an undisclosed amount of money.
The young man experiencing stomach pains and was taken to hospital but was pronounced dead on arrival, a local newspaper reported.

Although bodybuilders and fitness enthusiasts are known to add raw eggs to protein drinks, eating raw eggs raises risks of contracting salmonella, a bacteria that can cause fatal food poisoning. Food experts say the only way to reduce the potential risk of food poisoning is to cook the egg properly.

The death comes just months after another strange food dare ended in tragedy when Edward Archbold died during a cockroach eating contest in Florida.
Minutes after the contest the man, who was 32-years-old, collapsed, after downing dozens of live insects in the Ben Siegel Reptile Store in Deerfield Beach.

An autopsy report said Archbold died of “asphyxia by drowning”, as his airway was blocked by the body parts of cockroaches.