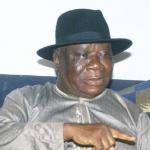 Ijaw national leader and former federal commissioner for information, Chief Edwin Clark has tasked governors in the Northwestern states on the need to improve on their internally generated revenue (IGR) rather than venting their frustrations on the Niger Delta.

This is in apparent reaction to speculations that the Northwest region will oppose any change to the present revenue allocation formula that could see more funds channeled to the Niger Delta.

Speaking at a lecture in Abuja on Wednesday, Clark berated the Northwest for advocating a reduction in the revenue accruing to the Niger Delta, saying it was insulting and provocative.

He cited a state like Lagos which he said was already generating more than the monthly allocation it receives from the Federal Government.

“It is therefore insulting for some governors to sit down in their states to vent anger on the people of the Niger Delta Oil producing communities, with accusations that the communities are already receiving too much money from the Federal Government,” Clark said.

He lamented the ecological problems and environmental hazards including spillage due to the age of the pipelines, saying that there are almost 400 spills yearly in the Niger Delta.

He argued that the Niger Delta was not greedy as it believed there was enough for everyone to benefit from the oil adding that 99 per cent of those who lift oil and have oil blocks are from outside the Niger Delta, which according to him was unfair and inequitable.