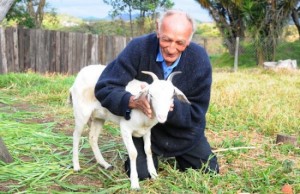 Aparecido Castaldo, a retired stone cutter from Jundiai, Brazil has decided to marry his beloved Carmella, a goat. Because no Christian minister would agree to perform the marriage ceremony, the two will be wed by a known satanic leader, in the Church of the Devil.

People have married their pets in the past, although in most cases the marriage ceremony was just a symbolic one performed by family or friends. However, 74-year old Aparecido Castaldo, a widower and father-of-seven, apparently wanted to be united with his goat Carmela in a church, by an evangelical minister. Unfortunately, none of the churches he contacted with his unusual request wanted to perform the ceremony, so Aparecido eventually contacted Toninho do Diabo (Tom the Devil), an old friend who just happens to be one of the most famous satanists in Brazil. The wedding is scheduled to take place at midnight, on October 13, at the Devil’s Church, in Sao Paolo. ”Only our church accepted this love between man and animal because we have no prejudice,” Toninho said.

Aparecido fell in love with his pet goat two years ago, and apparently she has already been accepted as a “stepmother” by the man’s seven children, who will all be at the wedding. Although their upcoming wedding has caused a lot of controversy in the community, and attracted accusations from animal rights activists, Castaldo said they have no plans to consummate their marriage. He just needs a life companion and Carmella is just perfect. “Whenever someone says I am doing something wrong I reply the goat does not speak, ask for money to go shopping and doesn’t get pregnant – and she can’t talk,” the groom-to-be praised his future wife. She does have one fault, though – she tries to eat everything, including the first wedding dress Aparecido got for her. Luckily, he was able to find another.

After the October 13 wedding, Aparecido plans to celebrate his union to Carmela with a barbecue party, but makes it very clear that there won’t be any goat meat served…