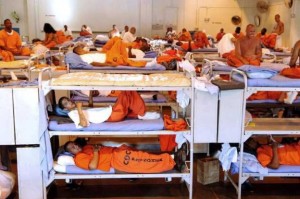 The U.S. Supreme Court decision to uphold the court order of a lower court, blocking California’s Proposition 8 ban on gay “marriage,” has inevitably resulted in gay people wanting to get married, regardless of their location.  This week the California Department of Corrections made the announcement that, effective immediately, inmates across the 33 prisons within the state will be allowed to “marry” their same gender partners.

So, will inmates be marrying inmates?  No, that’s the catch.  For right now, due to “security concerns,” the inter-marrying of inmates within the prison system is barred.

In a memo issued on August 30, M.D. Stainer, director of the Division of Adult Institutions wrote, “Effective immediately, all institutions must accept and process applications for a same s*x marriage between an inmate and a non-incarcerated person in the community, in the same manner as they do marriages between opposite s*x couples.”

Obviously the state code regulating the marriages of inmates will require some creative interpretation, as reported by LifeSiteNews.com. Stainer advised officials at the prison that “the terms ‘bride’ and ‘groom’ … shall be interpreted to be gender neutral where necessary (i.e. ‘bride may be a male and ‘groom’ may be a female in a same s*x marriage).”

So much for jailhouse lovers “making it official” behind the stone walls though.  If two people were brave and lucky enough to successfully be in love happily, while in prison, with another inmate, then perhaps these people, too, can hold tight until at least of one of them is released.