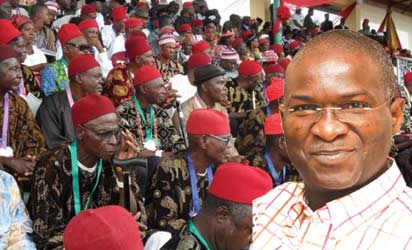 Following the issuance of an unreserved public apology to Igbos by Governor Babatunde Fashola for the misunderstanding that greeted the Lagos State Government’s deportation of 14 destitute from the state to Onitsha, Anambra State, the All Progressives Congress (APC), South-East zone has appealed to Ndigbo and Anambrarians in particular, to forgive and forget.

The party also appealed to Ndigbo, to let bygone be bygone especially those, who wittingly or unwittingly are transferring the aggression on Senator Chris Ngige’s governorship ambition to complete the good works he started in Anambra State.

Gov. Fashola had while speaking at an event to mark the Silver Jubilee of Aka Ikenga, an Igbo political think-tank group on Thursday in Lagos, tendered an “unreserved apology” to the Igbos for the row generated by the deportation.

He was quoted to have said among others, “People, who clearly do not understand the actions taken and words spoken are those I owe an explanation [on the repatriation]. I cannot take the Igbos for granted because we have built a relationship based on tolerance, mutual respect, love and trust.

“I offer an unreserved apology if the actions taken had been misunderstood,” Mr. Fashola had added.

South East APC, in a statement through the Zonal Publicity Secretary, Osita Okechukwu, advised Anambrarians not to allow the mistake of some Lagos State government officials to deny them the golden opportunity to elect Senator Ngige to complete his blue print.

It warned people of Anambra State to be weary of those money mongers and big bankers whose only manifesto is propaganda and only interest, profit motive.

The statement reads in part: “Now that Governor of Lagos State, His Excellency, Babatunde Raji Fashola has tendered unqualified and unreserved apology, we plead with Ndigbo and Anambrarians in particular to forgive and forget.

“To err is human and to forgive is divine,” the statement said adding that “we appeal to our people to put the matter behind us, especially those who wittingly or unwittingly are transferring the aggression on Senator Chris Ngige’s bid to return to Anambra State government to complete the good works he started.

“Ngige we must recall opened our eyes to what prudent management of state revenue can achieve, before then the governors only share the money and abandon projects. He did 20 percent of his Blue-Print, Governor Obi did and we need Ngige to complete it for the interest of future generations.

“It is also germane to note the roads Ngige tarred years ago are more durable than that of Governor Obi” the party stated.

The statement stressed that “They will tell you that Ngige is stingy. Yes Ngige is stingy, because he defends the interest of the greatest number of Anambrians and not the few big men.

“In sum, now that Governor Fashola has tendered an unqualified and unreserved apology, we should forgive and forget, for we must not use the mistake of some Lagos State government officials to deny Anambrarians the golden opportunity to elect Sen Ngige to complete his blue print” South-East APC stated.

Anambrarians will go to the polls come November 16, 2013, to elect a new governor to succeed Governor Peter Obi whose tenure comes to an end in 2014.