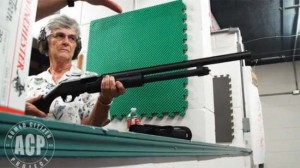 Hundreds of Florida residents accepted an offer this week for a free shotgun, according to the director of the Florida branch of the Texas-based Armed Citizens Project.

A website for the group, which offered one free shotgun per household, said the project hopes to create “gun rich” zones in moderate to high crime areas in the United States to analyze what happens to the crime rate when a neighborhood is saturated with guns.

But Ron Ritter, director of the Florida branch, said guns would be distributed to all comers instead of being concentrated in a defined location. He said the group expects to begin distributing shotguns “in the next 10 days.”

The group flooded a quiet Orlando neighborhood on Sunday with fliers about the free shotguns and ammunition to homeowners who pass a background check and take a firearms course.

Geovany Sinche, 40, a hotel maintenance worker who lives in the Sunshine Gardens neighborhood, said he was surprised to receive the offer since, he said, crime is not a significant problem there.

“I don’t think giving everyone guns is the solution. If I see something wrong, I call the police,” said Sinche.

Project founder Kyle Coplen could not immediately be reached for comment.

Ritter said the project also has branches in California, Illinois, Arizona and other states.