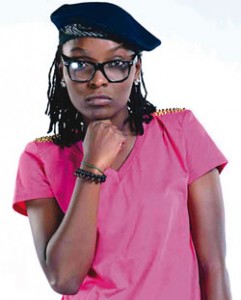 Even before the show started, the auditorium was already vibrating with shouts of ‘DJ Switch! DJ Switch!’ Her fan base was enormous. The young, the old love her and of course, when she was announced the winner of the reality, it was celebration galore.

Indeed, the road to this success for Obianuju Udeh popularly known as DJ Switch in the just concluded music reality show, Glo X Factor, was not an easy one.

So many other contestants had great voices that would give listeners goose bumps. In fact, all the finalists were outstanding. But DJ Switch was slightly different. First, she was a rapper and  her stage performance was second to none. She entertained the viewers effortlessly and as such, she made people vote for her every week.

Her mentor, MI, believed so much in her and never failed to tell her, ‘You are the X Factor’ after each performance. And with encouragement from her mentor and support from her fans and votes from the public, DJ Switch remained in the show and ended up the last girl standing.

Now, the young lady beat the other two finalists, Eshun and Vicky, and smiled home with the N24m cash prize and a record deal with Sony Music.

The grand finale was a spectacular event with Ghanaian artiste, Efya, thrilling the guests; 2008 UK X Factor winner, Alexandra Burke, performing to the guests and justifying why she won the reality show. But the flavour of the night was our own Flavour; he set the auditorium rocking with his songs.

However, all the side attractions didn’t take away the tension when the three finalists came on stage the final time. As much as virtually everybody wanted DJ Switch to win the show, nobody knew what name was written on the paper inside the envelop Toolz held tightly.

Eventually, after some moments, she announced DJ Switch as the winner and the soon- to- be- star, practically went wild! She was uncontrollable. She jumped down the stage and went and embraced her mum whom she said she hadn’t seen for a year because of music.

Speaking to Saturday Punch after the show, DJ Switch said she was exhilarated that she came this far.

“I don’t know how it happened. I don’t know 99 per cent of the people that voted for me. Now, my story has changed. My life has changed. I am grateful and thankful. Now, the main work begins. I am not going to relax,” she said.

Also, the runners up were not left empty handed. Courtesy of Glo, Vicky and Eshum went home with N1m each.