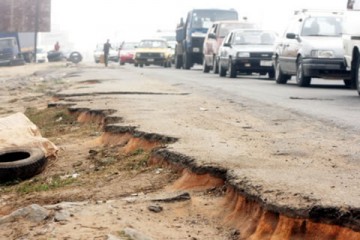 The Federal Government on Wednesday directed Julius Berger to begin rehabilitation of the bad portions on Lagos-Ibadan expressway to reduce hardship faced by motorists.

The Director of Federal Highways (South West), Federal Ministry of Works, said this in an interview with the News Agency of Nigeria (NAN) in Lagos.

“I was on the site and told Julius Berger to start patching the potholes. I believe by now they have started,” he said.

He said the company initially had a problem on where to build its site yard but the problem had been resolved.

Abdullahi said the process for the release of the 15 per cent contract sum to the company for the project was almost completed.

NAN reports that craters have developed on the highway around OPIC plaza on the Ibadan bound carriageway.

The craters have also appeared between Mountain of Fire and Miracle Ministries and the Redeemed Camp on the Lagos bound lane, causing slow movement of vehicles.

President Goodluck Jonathan had on July 5 flagged off the reconstruction of the highway. (NAN)